Digitized issues of the Duke Chronicle, the university’s student newspaper, dating from December 1905 to May 2000. END_OF_DOCUMENT_TOKEN_TO_BE_REPLACED

The Duke Chronicle Digital Collection features a complete set of issues from December 1905 to May 2000, all drawn from the holdings of the Duke University Archives. The Chronicle’s website has digital content from 1995 to the present.

History of the Chronicle

The Chronicle is Duke's independent, student-run newspaper. Founded December 19, 1905, it was called the Trinity Chronicle, as the school was called Trinity College at the time. It became the Duke Chronicle after the establishment of Duke University in 1924. The Chronicle was first realized as a weekly newspaper, but by the middle of the century had twice evolved into a bi-weekly and then a tri-weekly publication. In 1968, the paper expanded into a weekday daily. Originally run by the Columbian and Hesperian Literary Societies, it was financed through subscription fees. In 1925, a board of governors composed of students, alumni, and faculty, began overseeing the publication. It was then financed by student fees and advertisements. In 1980, the board was reconvened as the Chronicle Board. In 1994, the newspaper incorporated as the Duke Student Publishing Company, run by a 13-member board of former staff members, and is completely independent of the University. In 2013, the Chronicle announced it would reduce its publication schedule to four days a week during the school year.

Items in This Digital Collection (7,378) 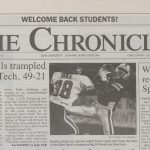 by Brittney Rankins about 4 years ago

Beginning Launch in…. Exciting news from Digital Collections! The 1990’s decade of The Duke Chronicle is being prepped for completion. It has been nine months since I started scanning The Chronicle, and I have come across some interesting stories and images. Despite the fact that I can’t digest the 1990’s being twenty years ago, flipping … END_OF_DOCUMENT_TOKEN_TO_BE_REPLACED

by Brittney Rankins over 4 years ago 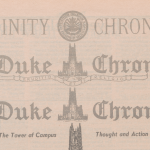 by Molly Bragg about 6 years ago